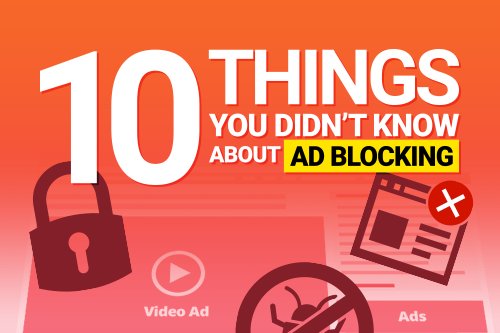 1.  Right now 220 million global users have an ad blocker installed on their desktop computer. That’s 4x the number of users since 2013.

2. That number is even higher for mobile users: at least 419 million people are blocking ads on their mobile devices today. That’s 22% of the world’s 1.9 billion smartphone users.

3. There are two sides to every story: online publishers estimated a loss of $22 billion in 2015 due to ad blocking.

4. One reason advertisers are worried about ad blocking: in a single day, the average person spends more time online (5 hours and 38 minutes) than watching TV (4 hours and 15 minutes) and consuming other media (newspapers + magazines = 21 minutes) combined.

5. The average demographic for an ad block user: young, technically savvy, and male. As a result, video game, social media, technology, and sports websites have the highest percentage of users who block ads.

6. According to the latest Advertising Demand Report from Adobe: 68% of users online believe ads have improved or stayed the same, 78% of users like the idea of personalized ads, but only 28% think they’re tailored to them correctly.

7. According to one researcher, a video ad displayed on a website can download over 50MB of data within minutes, affecting computer performance and browsing speed.

8. Online advertising is increasingly used to infect users with malware. In the past few years, the amount of malicious online ads has tripled. Malicious advertising is so common it even has a nickname: malvertising. Prominent websites which have been affected include the BBC, New York Times, and the Huffington Post.

9. A recent study found that more than half of ad block users would disable ad blocking to access content.

10. Some users see the hidden benefits of ad blocking, like Farhad Manjoo of the New York Times, who wrote, “Ad blockers could end up saving the ad industry from its worst excesses. If blocking becomes widespread, the ad industry will be pushed to produce ads that are simpler, less invasive and far more transparent about the way they’re handling our data.”